On Friday 19th August, McLaren Vale Golf Club hosted the 2022 SGG Janet Humphrey Women’s Foursomes event.
Janet Humphrey was a long time member of the Echunga Golf Club and was the first Life Member of the Club.  She was Club champion 10 times, served as Club Captain from 1966 – 1988 and contributed much to women’s golf.  The Memorial Foursomes Trophy was established in her memory.
Congratulations to the winners, Sarah Watson and Robynn Johnston (McLaren Vale) with a net 80.5.  The Runners Up were Di Starke and Karen Parsons (McCracken) with a net 83 on a c/b.
BDTL went to Chris Brock and Alleyne Johnston (Aston Hills) with a net 83, Di Krutli and Kerrie Edwards with a net 85.5 and Sue Telfer and Sue Maddern (Echunga) with a net 86.
NTPs Hcp (0-17) Jane Stewart (Willunga) and (Hcp 18-45) Sue Telfer (Echunga).
Southern Golf Group wish to thank McLaren Vale GC for hosting the event this year and their kind hospitality on the day. 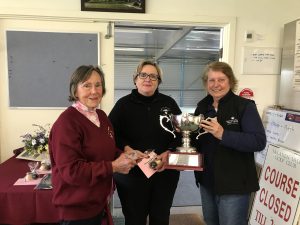 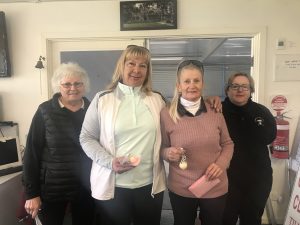